This location is part of my trip to Svalbard, more here.

Pyramiden, named after the characterizing pyramid-shaped over-towering mountain, was founded by Sweden in 1910. It was sold to the Soviet union in 1927 and proved to be a booming town with 1000 residents in it’s glory days. Everything was provided for since the town had a canteen, cultural center, school, hospital, swimming pool and a statue of Lenin overseeing everything. Pyramiden was, and still is property of the state-owned mining company Trust Arktikugol. In 2013 Arktikugol opened a hotel to allow visitors to stay over. When staying in the hotel one could imagine oneself being in in, say Saint-Petersburg, with a all-Russian hotel staff, Russian food and even Russian toilet paper.

We arrived at Pyramiden with the Aurora Explorer, a tour boat booked at Longyearbyen, the capital of Svalbard. Unlike the other tourists on the boat, we wouldn’t be returning with them. We had booked the hotel and where going to spend the next day in this fascinating place. One the boat had moored, all visitors where crammed into a bus and driven to the Pyramiden soviet monument. From there on, we followed the tour guide, who showed us some of the better preserved buildings of Pyramiden. Dealing with a big group and very limited time in each building we managed to snap some pictures, be it with the ISO cranked-up.

After the group had hit the mandatory gift shop, it was time to check into our room. We had chosen the Soviet-style room and where greeted by two lonely beds in a big empty room.

Once the boat set off, the quite came back and we where truly able to experience Pyramiden. The abandoned buildings, amidst an amazingly beautiful backdrop is almost surreal. The only noise was a flock of screeching seagulls that had occupied one of the abandoned housing blocks. As the sun was setting we set out to shoot some pictures of the harbor area. After cooking some dinner on a little camping stove in the middle of town, we hit the hotel bar for some Russian Baltika 7 beer and homemade vodka. 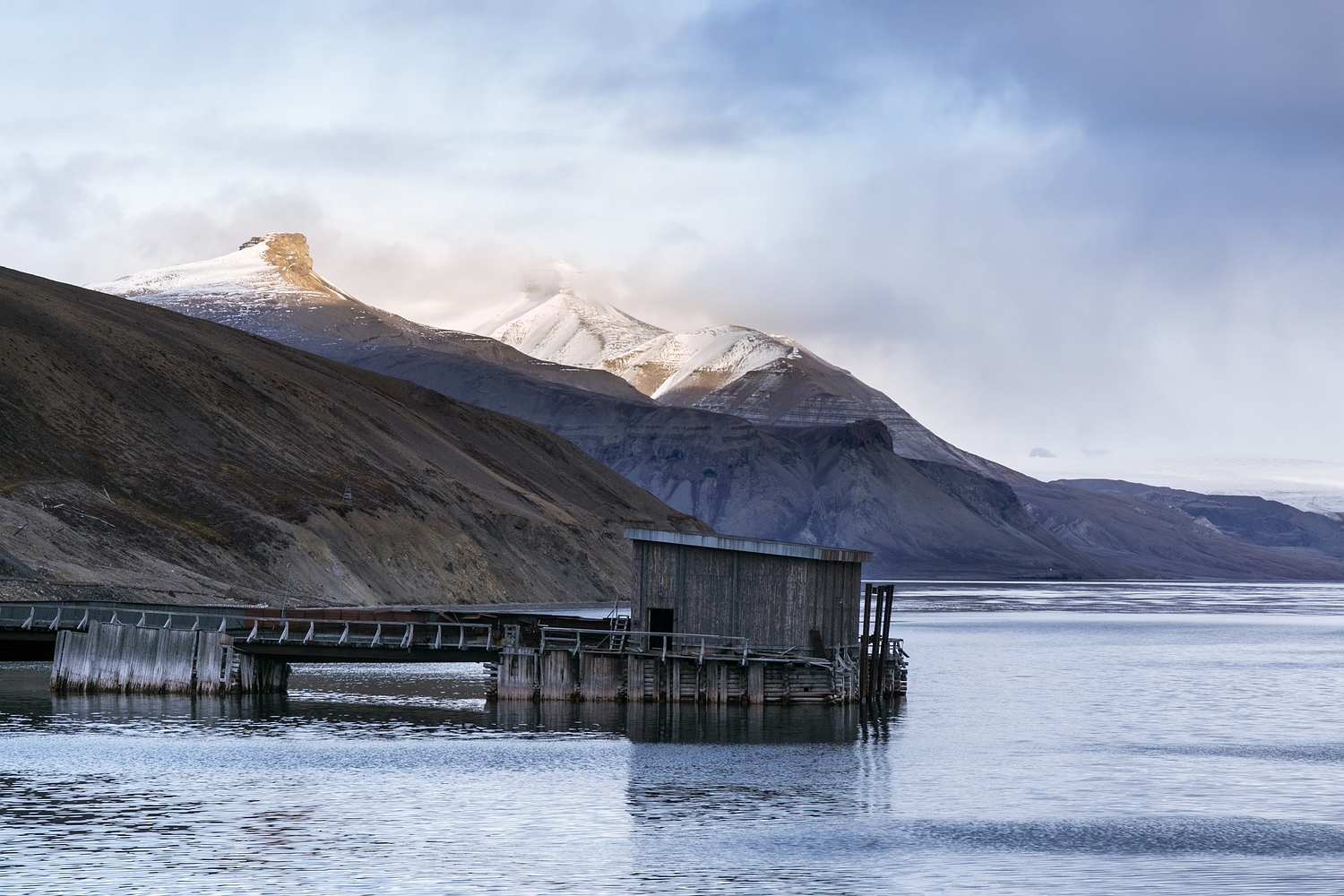 The next day, we found ourselves a bit hungover, but went out to explore some of the buildings not included in the guided tour. We found the mechanical shop and administrative buildings. Then we decided to check out what this town was all about: the coal mine. Climbing the mountain up to the mine entrance proved harder then anticipated, but was a pretty effective hangover remedy. We followed the tracks that once hauled miners and their equipment in carts up the mountain. Ascending the 350 meters to the top turned out to be quite the cardio workout, but we where rewarded with an amazing view of the desolate town and the impressive nature surrounding it. The low clouds and drizzling snow added to the atmosphere. We cooked some lunch and took some photos of the buildings on top. The mine itself was completely frozen shut (probably all-year round), as where all mines we found on Svalbard.

Gun for protection against polar bears 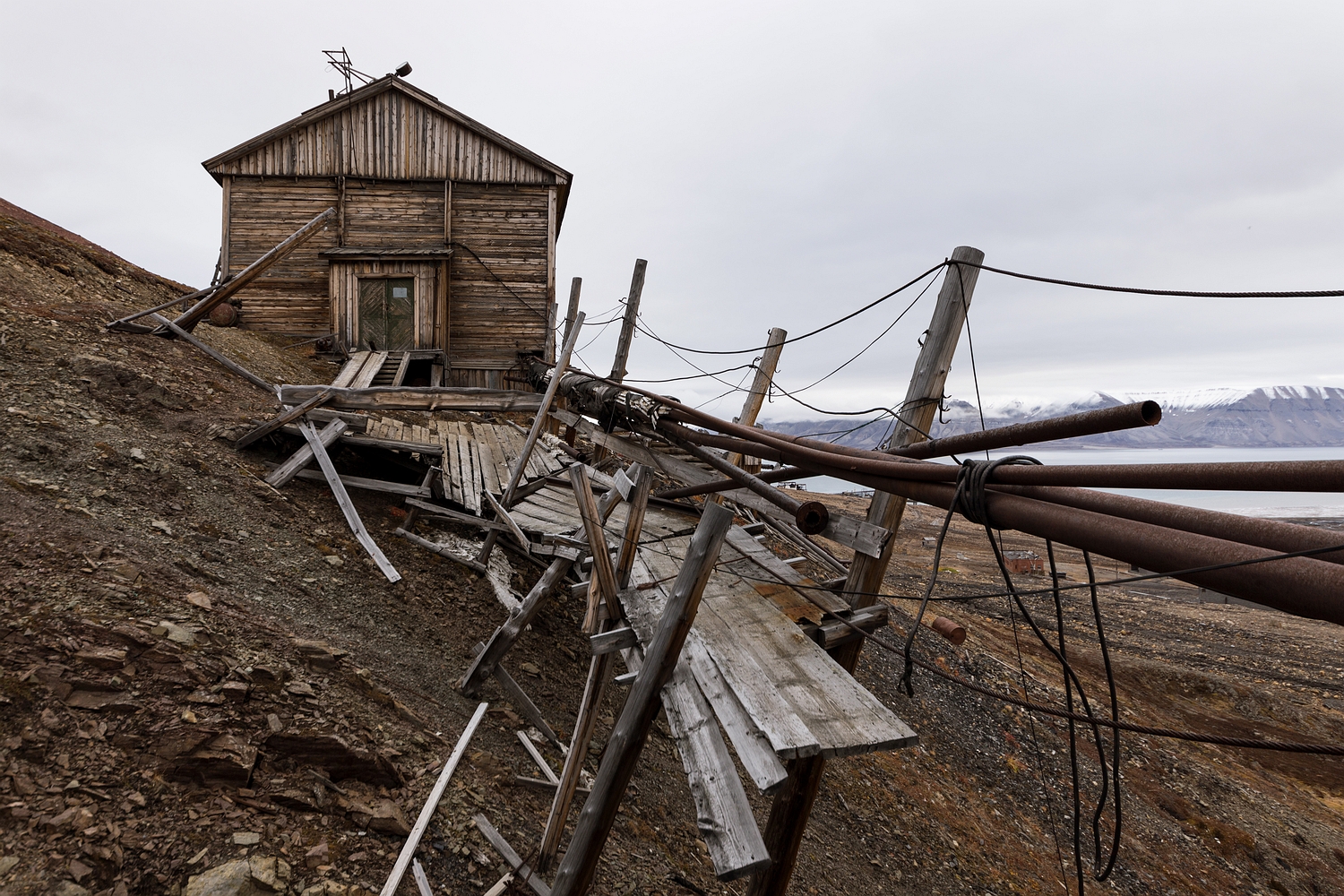 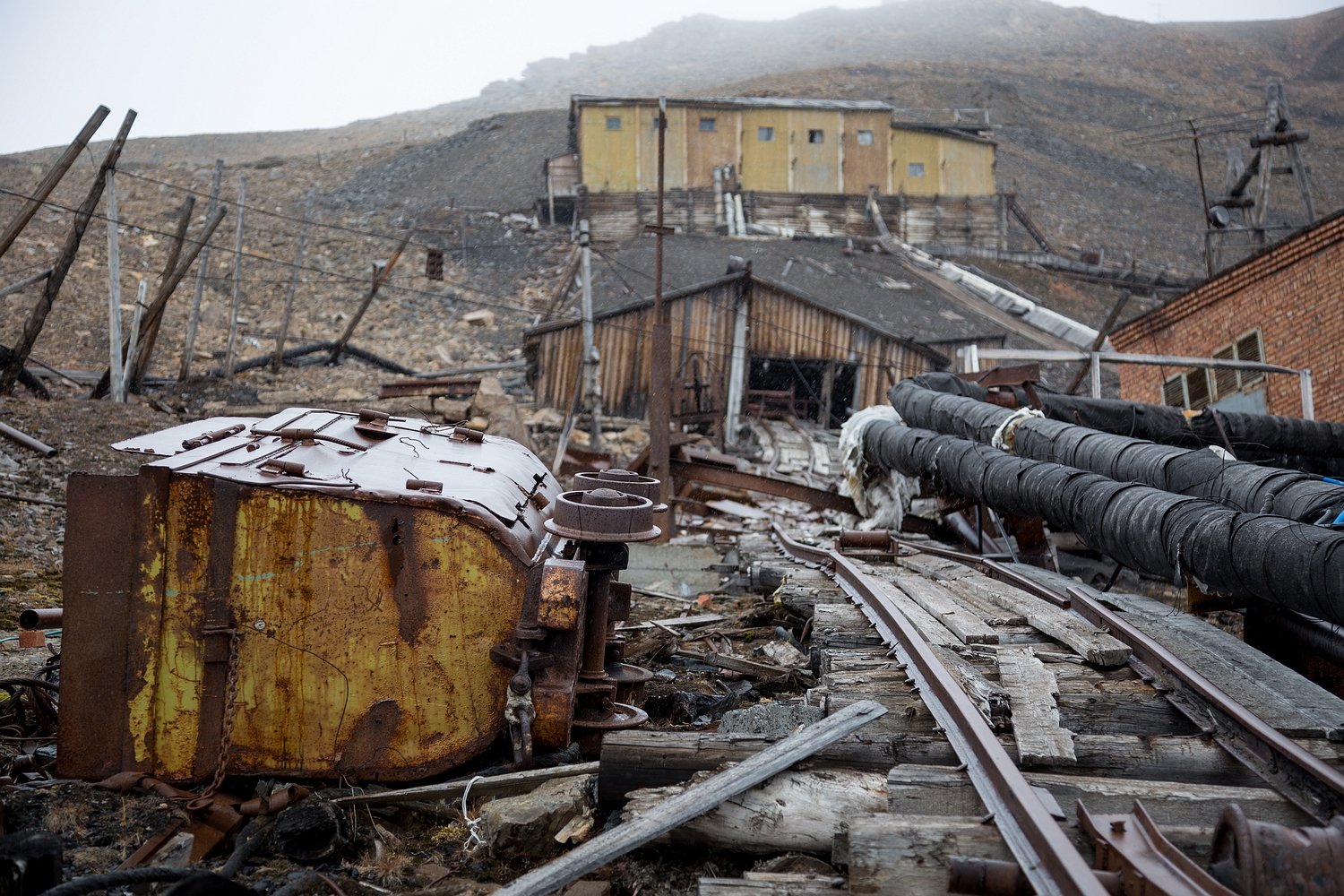 The departure time for our return boat was approaching so we decided to skip some of the buildings in town and head for the coal power plant in the port. Sadly this was the only place that was locked. 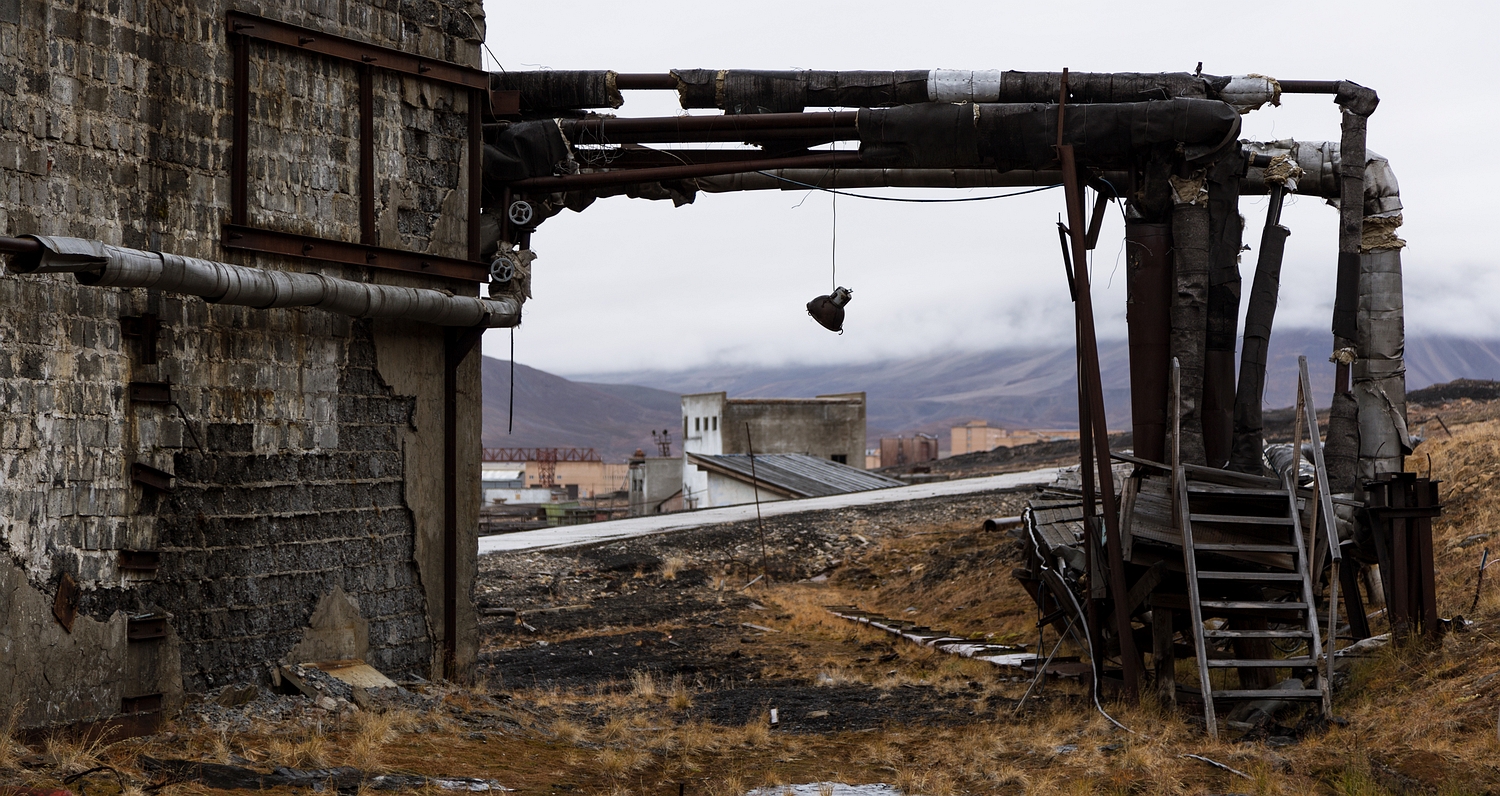 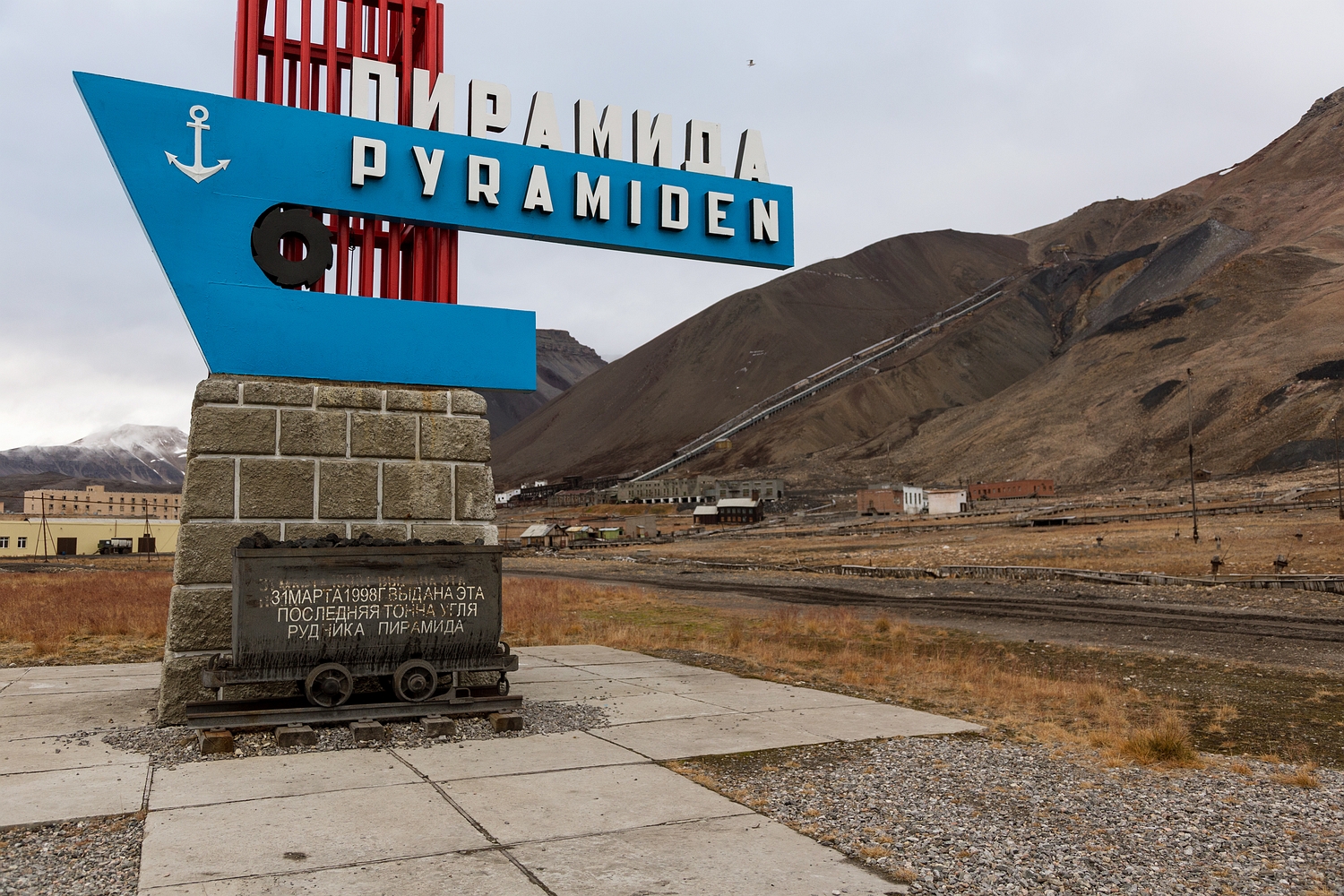 One Response to "Пирамида / Pyramiden"